END_OF_DOCUMENT_TOKEN_TO_BE_REPLACED

By
In Triolian
Posted  ,

END_OF_DOCUMENT_TOKEN_TO_BE_REPLACED

Aiersi as only real maker to make metal body resonator guitars in China. we would like to share more details about such vintage model.Currently, we  make two types of resonator instruments: tricone and single cone models. Tricone instruments have a very sweet and warm tone. This is due to their long decay (sustain) and slight attack. Single cone instruments are slightly louder than Tricones, and have a sharp (loud) attack with short decay (sustain). Because of this, single cone instruments sound much like a banjo. Which type of resonator you like may depend on what style of music you like. Many blues players feel the combination of single cone resonator, steel body, and mahogany neck used on the Duolian is the ultimate Blues guitar. The fancier nickel plated brass, single cone metal body instruments such as the Style O don’t have as bluesy a tone as the less ornate Duolian. This is attributed to their brass, not steel, body material. But they sure do look great! Personally, I feel the Tricone’s smoother, more complex tone is the best as same as National sound and look! A round neck tricone (in my opinion) is the ultimate resonator guitar

How the resonator works?
Resonator instruments use very thin aluminum speaker cones, known as “cones”, to mechanically amplify the sound of the instrument,which works the same as Nationals.This style of mechanical amplification was invented in the 1920’s, before the advent of electric instruments. At the time of their invention, they were considered the loudest guitar available. You can see some models have a single cone, several with ribbed coverplate,others have three smaller cones (known as “tricones” or “triplates”)on our website.

In a tricone, the three 6″ cones are set in a triangle. Two of the cones are on the bass side, and one on the treble side. Rather than a wooden biscuit bridge, there is an aluminum “T” shaped bridge that connects to the center of each of the cones. A maple wooden saddle sits atop the T-bridge. The vibration from the strings goes through the saddle, which in turn vibrates the T-bridge, and then the three cones. The sound has farther to travel to get the cones resonating than with a single resonator guitar. Thus, that’s why tricones are not as loud on the attack. However the sustain is greater, and the tone “sweeter”. This is because there are three cones all vibrating together, producing more harmonics than a single resonator guitar.

END_OF_DOCUMENT_TOKEN_TO_BE_REPLACED 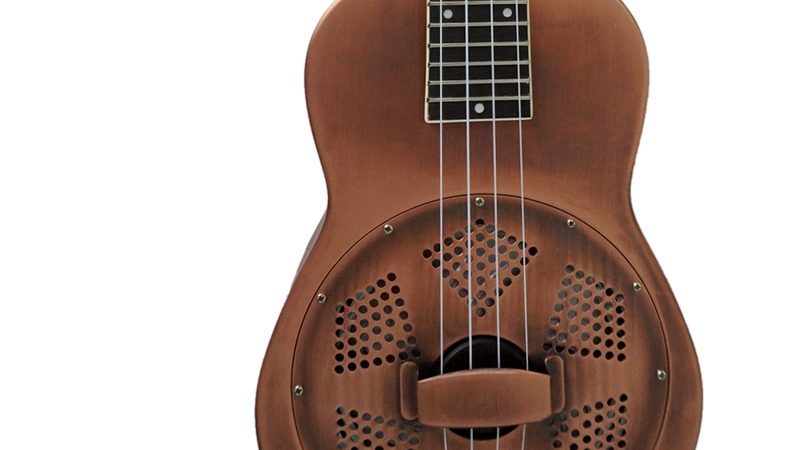